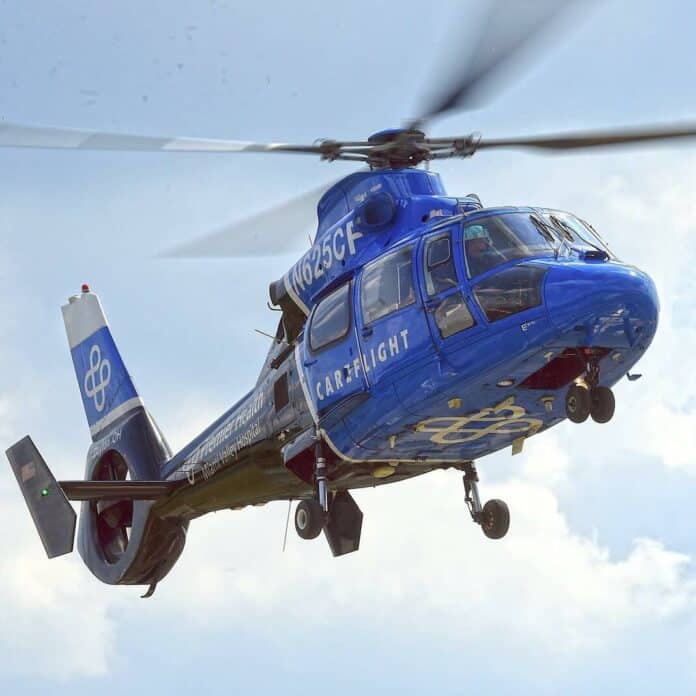 By Katie Shatsby and Sarah Bean

MILFORD TOWNSHIP — A CareFlight helicopter went down while responding to a crash that killed one and left three injured in Milford Township.

According to the Butler County Sheriff’s Office, a two-vehicle crash occurred on State Route 127 and Eaton Road on Tuesday morning.

The Butler County Sheriff’s Office said the driver of a blue 1998 Chevrolet Silverado was traveling east on Eaton Road. The driver then entered the intersection with State Route 127, into the path of a northbound gray GMC Sierra.

The Sierra collided with the Silverado, injuring all four of the Silverado’s passengers. One 69-year-old woman was ejected from the rear seat of the vehicle and pronounced dead on the scene.

The driver of the GMC Sierra was not injured in the collision.

A CareFlight helicopter was responding to the scene, however, dispatch reported that it crashed. The helicopter reportedly went down just before 5 a.m., said the sheriff’s office.

Premier Health released a statement saying that the helicopter “contacted wires and experienced a hard landing.” The sheriff’s office later said the helicopter crashed while attempting to land at the scene.

The patient was not on board the aircraft at the time of the crash, and the three crew members were able to exit safely. The crew has been taken to a hospital for evaluation. As of 12 p.m., two of the crew members had been treated for non-life-threatening injuries and released. A third crew member is still being evaluated.

“The safety of patients and crew is of the utmost importance to us. We are grateful that no one was seriously injured in this incident,” said Premier Health.

The Butler County Engineer’s Office reported that SR 127 is closed in both directions until further notice. The Serious Traffic Accident Reconstruction Team is processing both crashes, the sheriff’s office said, and will be working with the FAA on the helicopter crash.

The victims of the crash have not been identified at this time.