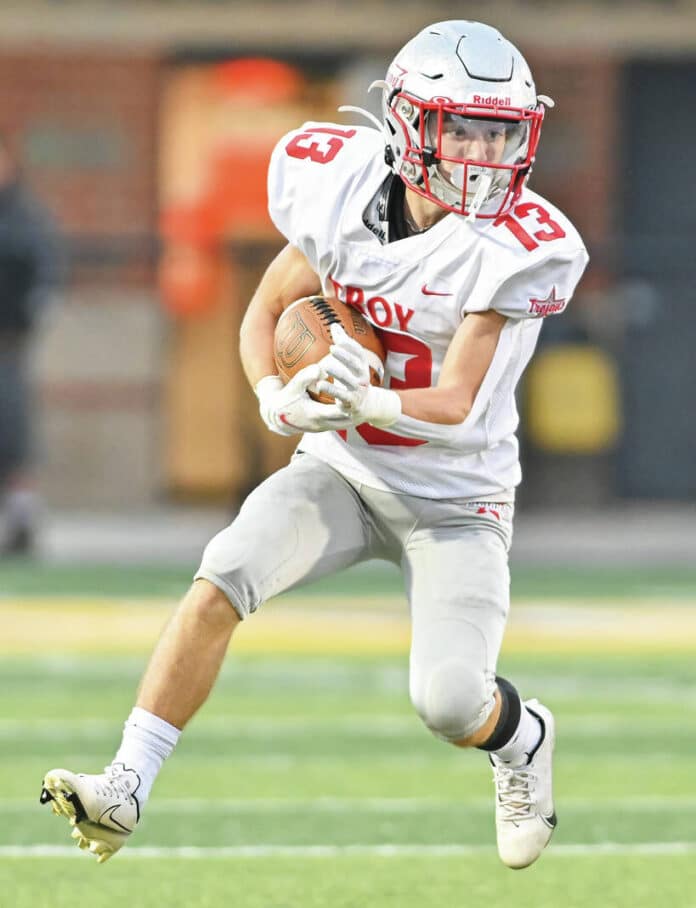 SIDNEY — The Troy football team picked up its third win in a row Friday night, getting past Sidney 25-7 in MVL action.

Troy got the scoring started with a safety in the first quarter.

Willie Ritchey ran 46 yards for a touchdown in the second quarter to make it 8-0, but the PAT kick failed.

The defense scored in the third quarter when Marcus Cavanaugh returned an interceptions 50 yards for a touchdown.

Cameron Stoltz made the PAT kick and added a 24-yard field goal to make it 18-0 going to the final quarter.

After Sidney scored on a 93-yard pass play to close within 18-7, Cameron Stoltz put the game away.

He ran nine yards for a touchdown and kicked the PAT.

Nick Kawecki led the rushing attack with 107 yards on 28 carries.

Colin Stoltz had 55 yards on nine carries and Ritchey had 53 yards on six carries.

Dre’Sean Roberts caught touchdown passes of 37, 37 and 21 yards and Brady Ouhl ran 58 yards for a score.

Andrew Miller had a 56-yard TD run, Ky Warner ran 21 yards for a score and Sam Schmiesing had an 8-yard TD run.

Ouhl completed six of eight passes for 131 yards and Dre’Sean Roberts had three catches for 95 yards.

Warner led the rushing attack with 204 yards on 15 carries and Andrew Miller had 74 yards on four carries.

Warner also had an interception and Brennan Johns forced a fumble.

Colten Beougher led the defense with 13 tackles and Johns had nine tackles.

Anderson, Schmiesing and Devon Finley all had eight tackles.

Blake Brumbaugh scored on a 65-yard run, a 30-yard pass from Nate Morter and a 38-yard interception return.

Morter completed all three of his passes for 58 yards.

Ozzie Gregg had eight tackles and Colten Hulgren had seven tackles and a fumble recovery.

Williams had seven tackles and Connor Dalton had six and forced a fumble.

PIQUA — The Bees improved to 2-4 overall and 2-1 in the TRC with a win at Alexander Stadium/Purk Field.

Truman also forced a fumble and Elijah Schroeder and Wyatt Goins had interceptions.