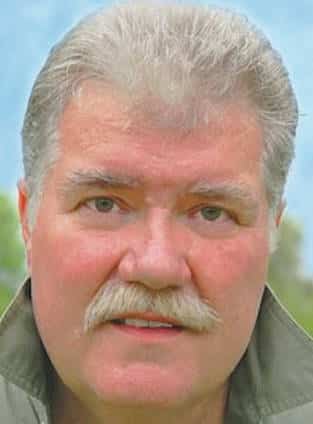 A friend from Georgia said pretty much the same. He called them “bodaciously loud” and went on to say how the piercing sound of their calls was “jarring, hoarsely metallic … and disturbingly similar to the screeching of my rusty old pickup’s worn brakes.”

Both descriptions came to mind recently.

I was following a favorite trail alongside Wolf Creek—admiring the little stream’s ice-sheathed pools and the bankside ranks of leaning, whitewashed sycamores. It was numbingly cold—somewhere in the mid-twenties. But a gleaming, near-blinding bright-blue canopy of vast January sky stretch high overhead.

So long as I kept moving, I could almost convince myself that I was comfortable.

Suddenly the morning’s peaceful tranquility was shattered by a clamorous chorus. Blue jays! Their cries were hoarse and excited—yet tinged with notes of what I swear was pure merriment.

No, I don’t think I’m being anthropomorphic.

This wild clamor emanated from a patch of scrub woods located along the top of the low hill overlooking the creek. Curious to see what the racket was about, I begin climbing the steep slope.

Upon huffing and puffing my way to the top, I found the fuss came from a half-dozen adrenalized blue jays gleefully mobbing a great horned owl.

The big bird had sought refuge by hunkering on the upper limb of a storm-topped beech. His back was firmly pressed smack against what remained of the lopped-off trunk.

Sitting stoically, the owl appeared to be impassively enduring the noise and harassment of the dive-bombing jays.

Or at least gave the outward appearance of trying to disregard the swarming throng. Because I also noticed how the cornered owl’s huge yellow raptor eyes glittered with malevolence as his head swiveled like a turret.

I have no doubt he was just waiting for one slip-up from a careless jay who swooped too close—thus providing an opportunity for the beleaguered owl to snatch out, close his piercing needle-sharp talons around a feathered throat, and enjoy the revenge of delivering a satisfactory throttling.

The jays, however, were masters of their bedeviling game and made no potentially fatal mistakes. They feinted high and low, left and right, like a pack of aerial jackals—but always just out of reach.

Disgruntled if not defeated, the owl finally shook himself, stepped off the limb and caught the air on his spread wings, then flapped away in determined if ignominious retreat.

The ebullient jay pack followed, taunting and persecuting, dive-bombing their fleeing target. Their high-spirited hullabaloo could still be heard long after all involved disappeared from view.

I’ve witnessed countless similar performances over the years. Owls are a blue jay’s ancient nemesis, and these noisy encounters are retaliations between prey and predator—potential victims and would-be perpetrators.

Owls are a wraith of silent death, stalking their meals during the cover of night. A roosting blue jay provides a perfect dinner target.

But while owls may rule the darkness, come daylight, the tables are turned. A plucky jay knows he can torment his would-be slaughterer with reasonable impunity—providing he’s quick and careful.

Blue jays aren’t the only birds a hunting owl kills and eats, of course—though the jays probably don’t know this fact.

Or maybe they do…

Regardless, blue jays aren’t just colorful, brazen birds with an excess of impudence and attitude. Being members of the Corvidae family—a grouping that includes crows and ravens—they’re notably bold and intelligent.

Corvids, in general, are bold and intelligent. They all excel in impudence and attitude. And like blue jays, both crows and ravens regularly take great delight in tormenting any owl they find—assuming the role of self-appointed defenders and disciplinarians, ready and willing to make any owl discovered during the day as miserable as is safely possible.

If you have bird feeders, you may suffer mixed emotions when it comes to blue jays. They can do a dandy job of cleaning out your seeds in appallingly short order. And they don’t play well with other birds, either; blue jays are bullies—loud-mouthed bullies, ready to disturb the peace and squabble with any and all, unwilling to share either food or space.

Still, some botanists credit the seed-and-nut carrying blue jay with almost single-handedly planting the oak, beech, and chestnut forests that once covered much of eastern North America. That historic effort deserves both respect and consideration…and no doubt they’re even now continuing similar replanting efforts.

Personally, I’m an unrepentant fan of this colorful fellow. Unless you’re an owl, winter would definitely be less enjoyable without the scrappy, bodacious blue jay.