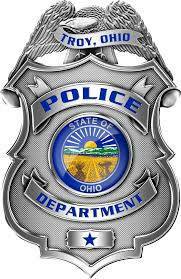 ACCIDENT: An accident with no injuries was reported in the area of West and South Stanfield Roads at 8:11 a.m.

UNRULY: At 9:59 a.m. on the 1000 block of Park Avenue, an officer came in contact with a subject in reference to an unruly juvenile report. As a result, two juveniles were charged with unruly juvenile.

CRIMINAL DAMAGE: An officer was dispatched to the 800 block of East Franklin Street for a report of a criminal damaging at 11:48 a.m. Upon arrival, a report was taken and a summons issued.

FALSIFICATION: Dispatched to the station in reference to a possible theft of medications at 12:19 p.m. Reported medications left in a vehicle while in the parking lot of Meijer. Further investigation found medications were not stolen, and subject attempted to make a false police report. Matthew S. Nallen, 38, of Troy, was charged with first-degree misdemeanor falsification in connection with this incident.

FRAUD: There was a fraud complaint on South Weston Road at 12:34 p.m. A report was taken.

ASSIST SQUAD: Dispatched to an assist squad at Walmart at 3:50 p.m. Charges were filed, and a report was taken.

ACCIDENT: An accident with injuries was reported in the area of North Elm and West Main streets at 8:51 p.m.

TRAFFIC: An officer stopped a vehicle for speeding, and the driver, Brandon K. Jackson, 41, of Troy, was subsequently arrested for OVI and cited for minor misdemeanor possession of Marijuana on West Main Street at Plum Street at 4:16 a.m.

ANIMAL COMPLAINT: At 10:09 a.m. on the 3000 block of McKaig Avenue, an officer came in contact with a subject reference an animal complaint call. Lauryl D. Firman, 40, of Troy, was cited for minor misdemeanor animal running at large in connection with this incident.

FRAUD: An officer was dispatched to the Troy Police Department lobby in reference to an identity theft complaint. This case was suspended.

FRAUD: An officer was dispatched to Governors Road at 12:34 p.m. in reference to a fraud complaint. This case is active.

TRAFFIC: An officer stopped a vehicle for a traffic offense on the West Market Street overpass and cited the driver for driving under suspension and minor misdemeanor possession of marijuana.

ACCIDENT: An accident with no injuries was reported in the area of South Dorset Road and McKaig Avenue at 8:50 p.m.

ANIMAL PROBLEM: An officer responded to the 500 block of South Ridge Avenue in reference to an assist squad at 10:38 p.m. Upon further investigation, one male, Jermaine A. Carroll, 40, of Piqua, was charged with failing to provide the dog antirabic vaccine and for a dangerous dog. Case closed.

UNRULY: Report taken on an unruly juvenile complaint on the 1000 block of Park Avenue at 11:24 p.m.

HIT SKIP: Officers responded to the 100 block of West Main Street for a report of a hit/skip accident at 12:24 a.m. The driver was identified and cited for hit/skip and failure to maintain reasonable control.

HARASSMENT: Officers to the 2000 block of Fieldstone Court in reference to a disturbance at 2:30 a.m. No one was charged in this case, and the suspect was not able to be contacted. Case closed.

INFORMATION REPORT: Truck’s rear window broken sometime overnight on the 2000 block of Glenmore Court. Unknown if damage was caused by someone or if the window broke unknowingly by shutting doors. Information report taken.

UNRULY: At 12:47 p.m. on the 1000 block of Park Avenue, an officer came in contact with a subject in reference to an unruly juvenile report. A juvenile was charged with unruly juvenile.

ACCIDENT: An accident with injuries was reported on the 1000 block of South Dorset Road at 2:49 p.m.

ASSAULT: Dispatched to the 1000 block of West Market Street for a disturbance at 7:51 p.m. An adult male and female were charged with assault; report completed.

THEFT: A theft was reported on the 500 block of Staunton Commons Drive between noon and 9:14 p.m.